How Hotkeys and Quick Keys works

Illustrator only supports Hot Keys through Actions which are limited to only the Function Keys.

PowerScripts will automatically create actions which then run pre-saved scripts that instruct PowerScript which key was pressed.

In order to enable Hot Keys and Quick Keys, special script files must be installed in the Adobe Illustrator Scripts folder.

If you see a red warning box, press the [Create Scripts] button (This only needs to be done once)

If you encounter any problems with this step, follow the guide to Manually Installing Hotkeys required files

How to use the function keys on your Mac

To use the standard function keys, hold the Function (Fn)/Globe key when pressing a function key. For example, pressing both Fn and F12 (speaker icon) performs the action assigned to the F12 key instead of raising the volume of your speakers.

What is the difference between Hot Keys and Quick Keys? 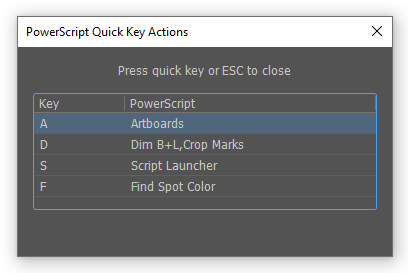 How to create key commands 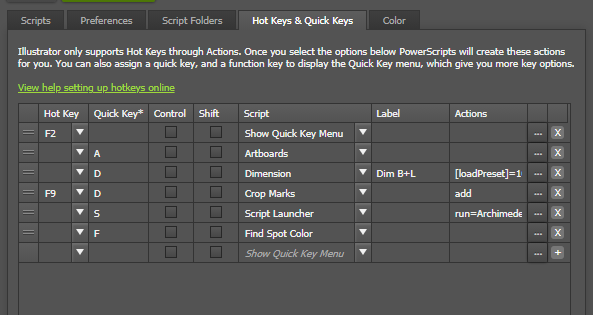 The screenshot above shows a list of scripts that will be run when the selected key is pressed, each script can be assigned multiple actions to run once loaded 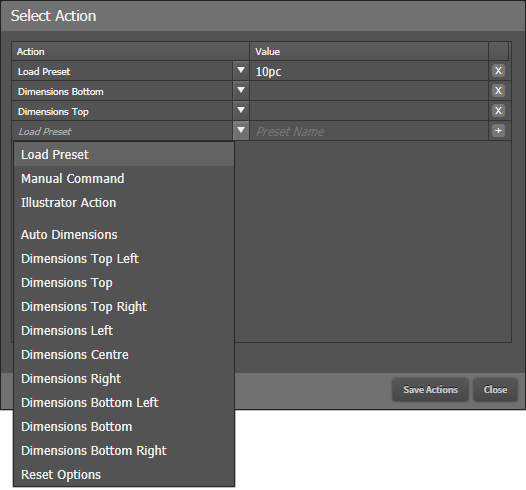 By default, when a key is precessed the script is loaded. To make the script run you need to set up a list of actions.

Including PowerScripts with your own Actions

Run PowerScripts from your actions

This is not recommended, but you can copy PowerScript actions, and include the key trigger step into your action, The commands in PowerScripts are asynchronous. which means that Illustrator sends a command to PowerScripts then immediately runs the next action, while PowerScripts processes the command, Therefore they should always be used last

DO NOT edit the PowerScript actions as these will be automatically deleted and regenerated every time you edit your preferences. You will need to copy the action items to your own actions in a different Action Group.

Run actions from within PowerScripts

Hotkeys or QuickKeys can run Illustrator actions, so we recommend you include these in yourpreferences. They can be added directly as a command or as a set of actions assigned to a script.You also have the advantage of chaining actions together to run multiple actions using one keypress

Use your own scripts

If you want to use PowerScripts with your own complicated actions, you will need to write a script and send commands to PowerScripts. See Controlling PowerScripts from Extendscript